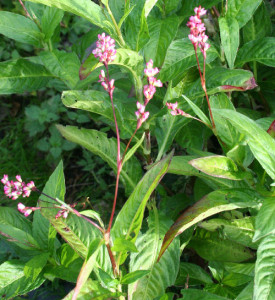 The Plant
A Traditional Asian Botanical Herbal Medicine, Indigo Naturalis (Ching Dai青黛) has been used for centuries as a fabric dye in Asia. Its use today still continues in China and also in Japan as a blue dye for clothing and textiles. The blue dyeing process in Japan, called Shibori, dates from the 8th century and its origin and use in China could easily be a thousand years earlier. Additionally it has been widely used in Asia, as a natural healing remedy with both external and internal applications especially in Thailand, India, China, Korea and Japan. Indigo has had many hundreds of years of traditional use as a topical remedy for various skin ailments, including psoriasis and eczema. In this ancient tradition it is also combined with other herbs for internal use and extracted in vegetable based oils for external therapeutic application. It has also been used internally in formulas with other counter balancing herbs, though with caution due to its strong or potentially toxic characteristics and always under the direct guidance of an herbal health professional. The name Indigo Naturalis evolved to become the generic name in English for 青黛 Ching Dai, based on the plants use in dyeing cloth an indigo-blue color. However, its actual botanical name is Persicaria tinctoria. More information about the botanical name can be found here: http://en.wikipedia.org/wiki/Persicaria_tinctoria

Traditional Uses
Indigo Naturalis (Ching Dai 青黛 Persicaria tinctoria) has been used as an effective therapeutic agent for centuries in Asia. In one early text from the ancient 8th century Chinese herbal, The Medical Secrets of an Official (Waitai Miyao) by Wang Tao, it is sited, where it mentions its healing applications for internal ‘heat’ conditions, including the treatment of skin symptoms that are what we label as psoriasis or eczema today.

In the introduction to the following document link it states:

“We have used indigo naturalis to treat more than 10,000 patients with psoriasis during the past 11 years. Our clinical trials showed that topical application of indigo naturalis significantly improved skin psoriasis.”